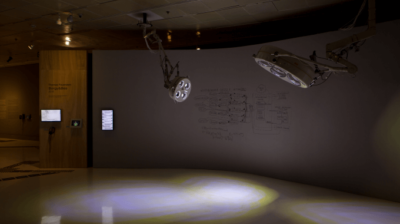 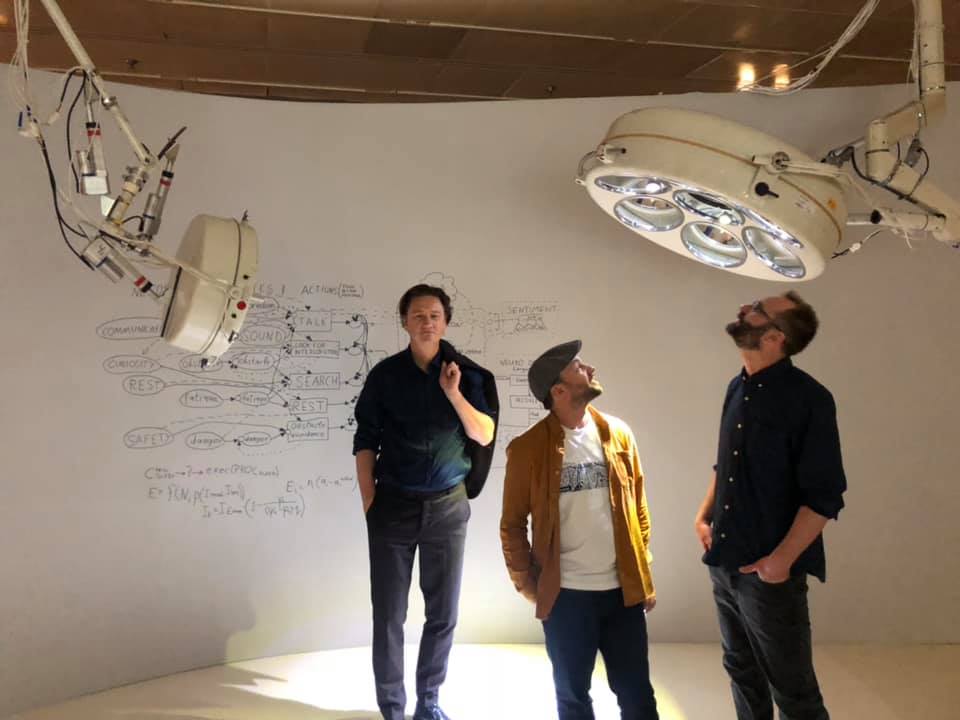 Within the exhibition Cybernetic Consciousness [?] Quantum Horizon Laboratoria Art&Science presents a neurorobotic installation “Borgy&Bes” by Thomas Feuerstein which was produced by Laboratoria Art&Science in collaboration with deep learning researchers from iPavlov, MIPT (Moscow Institute of Physics and Technology) and robotic engineers from the National Research Center Kurchatov Institute.

Borgy&Bes consists of two vintage operating surgery lamps transformed into robotic cyber-creatures, who move, talk, whisper, and argue with one another. Borgy (from Cyborg) and Bes (from “Demons” by F.M. Dostoevsky, ‘Besy’ in Russian) discuss online data from Russian newsfeeds and perform them in the 19th century language of F.M. Dostoevsky. This slightly surrealistic anachronistic twist is deeply rooted in the Russian cultural context and contemporary socio-political reality.

“Artificial intelligence and quantum computing are two lines of rapidly evolving technology. They go beyond the mere amplification of human capacities, because one leads us to question what intelligence and consciousness actually are; and the other, to question our own reality. It seems inevitable to me that these two technologies will merge somehow in the near future, which makes it urgent to think about them.

The texture of the real

The quantum model involves a series of mathematical equations capable of accurately anticipating experimental results. It is the most accurate model developed by physics to this day. From its practical application has resulted, for example, all our digital technology. However what these mathematical equations actually represent is, in today’s physics, open to different interpretations.Take as an example the “wave function”, a state descriptor in the quantum model. In a very general way, one of the interpretations (the “Copenhagen’s”) considers that this function results in the probability of an event occurring. In another interpretation (called “the many worlds”), the wave function results in the probability of our conscience being in the specific universe where that event occurred. In mathematical terms, nothing changes, these are only interpretations of what the same function would mean. But such different visions have a great impact on what our reality can be: do we live in a universe where quantum possibilities are only virtual and our reality is a single one, or is the universe we perceive only a fraction of a much larger Multiverse, where every quantum possibility really happens, in a deterministic way? How can the same model result from such different realities without any mathematical inconsistency occurring?

In short, the mathematical model works (we know this for almost a century of experiments and practical applications), but we still do not know what kind of reality it describes. In science, this may not be a relevant issue – what matters is that the model works according to experimental results. In art, however, I think that the question of the reality behind the model should be of the utmost importance.

Is the digital age ending?

A quantum computer works radically differently from a digital computer. Such computers may have been just a matter of laboratory experiments a few years ago, but their development has been growing at an accelerated pace, as evidenced by the recent commercialization of machines from the Canadian company DWave and by the latest models from IBM. They may be still not quite the “universal quantum Turing machine” proposed by David Deutsch in 1985 – nevertheless, they constitute a strong evidence of the viability of this new computation model.

While a digital bit may contain the values “0” or “1”, a quantum bit (a qbit) can store “0” and “1” simultaneously. This difference results in behaviors that defy our common sense. A variable composed of qbits can store all possible values for that number of qbits – and does so at the same time. An image constructed by qbits would contain all the possible images for that number of pixels (absolutely any and all images: from graphic noise to photos that have not yet been taken). A quantum text file would be something similar to Borges’s “library of Babel” (all possible combinations of text would be there), but with one important difference: the storage space would be similar to that of a common digital file, it would not be necessary to have a library of infinite dimensions, as described in the story.

The processing of these qbits can also be disconcerting: when an algorithm acts on a quantum variable, it can do so on all possible values simultaneously. It is difficult to predict how quantum algorithms will change our daily life, but the field of artificial intelligence will be radically affected.

Digital artificial intelligence algorithms are built to test a large ensemble of numerical solutions and find the most appropriate according to certain criteria. So it is with genetic algorithms that generate and test a large number of possible solutions, in “generations”, to select the best ones, and with the training of neural networks, that searches for multipliers, or “synapses”, that minimize the error between numerous sets of problems and their respective solutions.

Much of these digital codes are dedicated to generating different possibilities so that they can be sequentially evaluated one by one. Populations of genetic algorithms, for example, do not account for all possibilities – this would be very costly in terms of digital processing. In fact, part of these algorithms is dedicated to trying to evade the so-called “local minimums” of solutions that would be “stuck” to certain regions of the solution field precisely because it is a sample of that field, not all possibilities.

That would not be the case in a quantum algorithm. Each quantum variable can contain all the possible values, so the search for solutions is complete – and without the limitation of generating and evaluating them (values “are already there”, there is no need to generate and test them one by one).

If in today’s digital technology machine learning already impresses us and, in many cases, surpasses our own capabilities, what to expect in the near future, wen artificial intelligence algorithms will simultaneously evaluate all possible options? How much of reality do we realize? Now, if human consciousness is limited to only one of these different realities, would a cybernetic consciousness transcend this narrow horizon, operating in the vastness of the Multiverse?”