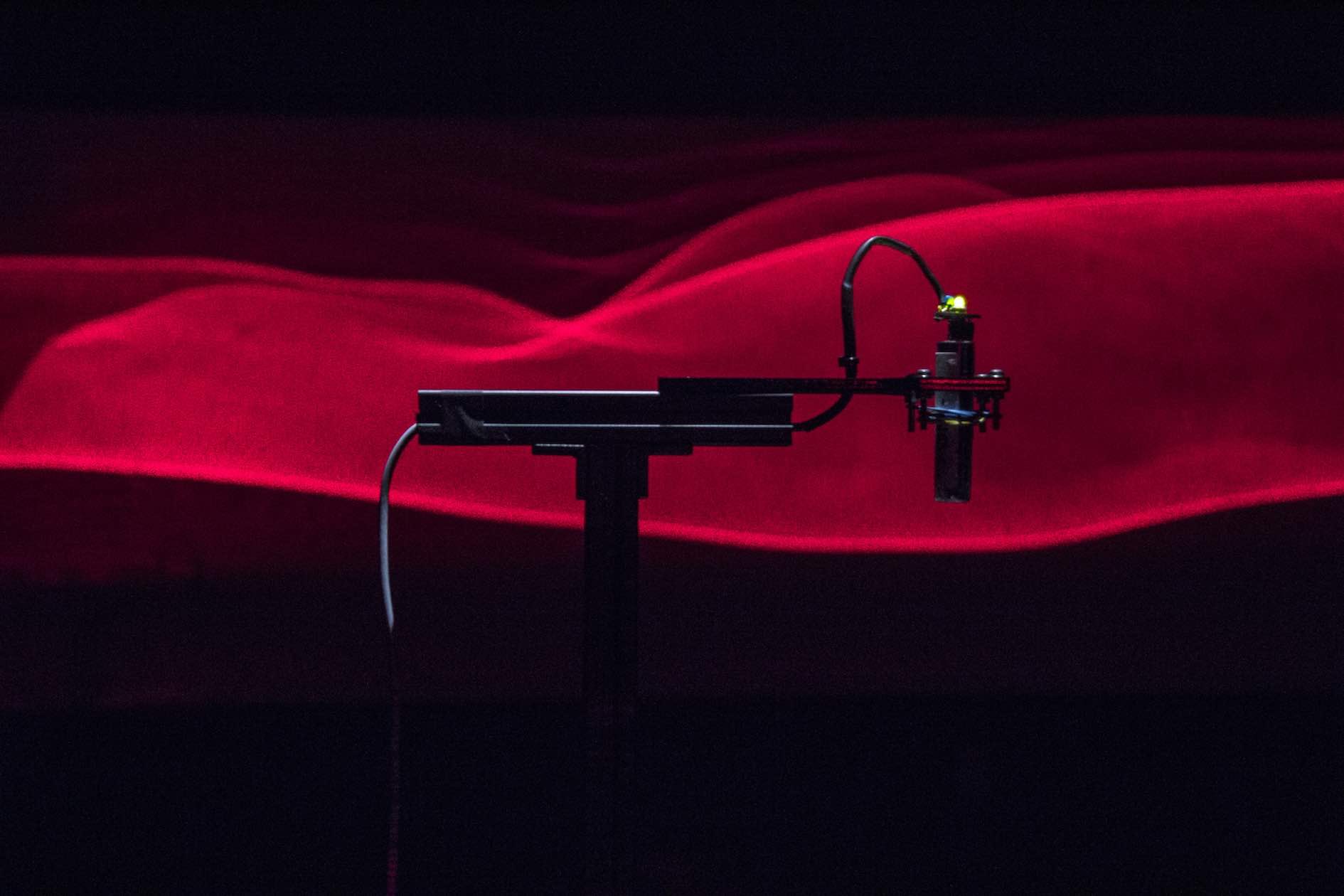 Agnes Meyer-Brandis (Germany)
One Tree ID — How to become a tree for another tree
Biochemical installation, 2019

A biopoetic and biochemical odour communication installation and experiment between an individual tree and humans. In the natural world, smells play a role in the system of communications between trees. Agnes Meyer-Brandis gives you the chance to be part of this communication and hold a conversation with a tree.

The artist worked with scientists to collect aerosol samples containing volatile organic samples that determine the scent of the selected tree. These substances were then synthesized in a laboratory and turned into the basis of a perfume that could make you become a tree for another tree.

On a biochemical level, this offers an opportunity to enter into a conversation that is invisible and inaudible by its nature.

Thanks to the ‘Mega Sad’ Garden Center for its support.

The artist uses machine learning to create a new written and spoken language. This language is based on a computerized interpretation of a ‘Martian language’ derived from the visions of the late 19th-century Swiss psychic Helene Smith. Today, Sutela’s project is giving a voice to this language and its texts are generated by the movements of the extremophile bacterium Bacillus subtilis nattō, which the latest space experiments suggest could live on Mars.

The machine becomes a medium, which transmits messages from entities that cannot usually be heard and thus helps to connect with worlds outside our consciousness.

WannaScry! makes us think about privacy, including the risk of our personal and biometric data being intercepted online, for example by a video conferencing system. ‘Palantir’ lets the viewer join a video conference with other visitors and records that conversation. In observation mode you can see a world of digital footprints collected by the work: portraits of chat participants past and present, transcripts of their messages, and read and recognized biometric data and geo-locations.

The name of the project and the term ‘palantir’ were carefully chosen. WannaScry! refers to the magical crystal ball that helps people to ‘scry’ or see the future. WannaScry! also references the 2017 WannaCry network worm that encrypted data and demanded a ransom to release it.
WannaScry! Mixes the past and the present in the user’s eyes and forces us to think about protecting our personal data, because any online activity will leave footprints on the internet.
This project was created specially for the LABORATORIA Art&Science Foundation
Supported by Kaspersky

Instruction
Scan the QR code or type WANNASCRY.ME into the browser on your mobile device;
To join the video call, click OK after accepting the terms.

The artist Marion Laval-Jeantet carried out an experiment on herself in an attempt to bridge the gap between humans and animals. She mixed her own blood with a horse’s blood by injecting herself with equine immunoglobulin.

Laval-Jeantet spent several months preparing for her performance. The artist called this process Mithridatization, in memory of the Hellenic king Pontus Mithridates VI, who built up an immunity to poisons by ingesting small quantities of them each day. In this work the combination of human and animal is a metaphor for the unity of nature and an allusion to the mythical centaur.

“My new body was super-powerful, super-sensitive, super-nervous and very unsure of itself. As we know, herbivores are very emotional. I couldn’t sleep. For a little while, I probably felt like a horse,” said Marion Laval-Jeantet.

Art Orienté Objet critiques the established belief that species are entirely separate from each other and that our bodies are hermetically sealed and impenetrable. The possibility of mixing blood demonstrates a relationship between human and horse.

The artist explores the possibilities of artificial intelligence in the context of bio-semiotics. Just like human language recognition, machines can distinguish bird phonemes – minimal fragments of repeated elements with a semantic meaning.

In the first stage of the project, Helena Nikolone trained a neural network with recordings of a nightingale’s song, creating a situation where two non-human elements communicate: birds and AI. In this case, AI is not a mediator or an interface for communication, but a fully-fledged participant that can help us understand birds through language.

In the second stage, the artist used machine learning to form the basis of an interpreter-translator from bird language into human language. AI becomes a universal tool to study the structure of bird language. It acts as a mediator between man and nature, facilitating understudy and interaction.

In this experiment Marina Abramovic explored the phenomenon of non-verbal communication with a group of Russian neurophysiologists. The experiment seeks to test the hypothesis that our brains’ activities will synchronize when we look into the eyes of another person.

This neuroscientific experiment embodies the question of the exchange of energy between performer and audience, something that has long interested Abramovic.

The experiment was prepared by Professor Alexander Kaplan and researcher Arina Kochetova at the laboratory of neurophysiology and neuro-computer interfaces at Moscow State University.

The Earthlink installation is a closed ecosystem in four parts, connected by pipes that exchange air: Inspiration, Expiration, Symbiome and Biome are open to coexistence with humanity and lead us towards an experience of a post-human reality.

Inspiration is a breathing station that allows viewers to inhale air enriched with the Mycobacterium vaccae soil bacteria. These can improve our mood, ease anxiety and boost mental acuity.

But the technology is unstable: the algorithms that control the respiration masks do not always guarantee a timely air supply nor a uniform enrichment with the bacteria. What happens when a process as intimate as breathing is mediated by technology?

Expiration collects viewers’ microbes in externalized lungs as they breathe out. Those lungs are then ‘cleansed’ of both human and non-human secretions by falling drops of Cupressus sempervirens, an essential oil of the cypress tree. As they fall onto the red-hot, dry ‘cemetery’ beneath, they evaporate. How can we survive? And how can we mourn what burns out and ends?

The Symbiome has an intermediate position, containing the Trifolium pratense clover and Rhizobium bacterium. Their symbiotic relationship produces oxygen and fixes nitrogen, both essential for human life. This symbiotic process affects the intensity of the flow of water as it circulates in a flask, forming ripples upon it. How do we interact in response to sudden environmental changes?

Biomes are mediator systems populated by non-human agents that repeatedly cycle through biogeochemical interactions. Soil, plant seeds, bones from poultry farms, bacteria, flies, mushrooms, lava stones, air, water, microplastics, cat hair and human hair all exchange their microbiomes over the air currents. How are we transformed when we interact with the microbiomes of others?

Earthlink empowers viewers to build connections with our planet and become more holistic because this process of exchange is crucial for developing relationships.

This project was created with the support of the Ministry of Culture of the Republic of Slovenia, the City of Ljubljana and Projekt Atol.

Every contemporary electronic device is created from electronic components which, in their turn, are made from minerals. Specific properties of crystals of certain minerals make it possible to implement varied functions and create every imaginable electronic component: resisters, LEDs, transistors, etc. Producing modern electronics may be incredibly complex and technologically advanced, but the raw minerals have almost the same properties as the finished components: they can glow, act as semiconductors or generate electronic resistance.
This installation’s central element is a huge cluster of magnetite crystals. Magnetite is a semiconductor with a weak but easily measured conductivity. Installed at the center of the work, the rock sample is constantly ‘felt’ by special electrodes that measure that conductivity. Within this large cluster, where individual crystals of different sizes have a different fit and polarity, it becomes a kind of data matrix where different points have different resistance. Yet the grid of this matrix is unpredictable, and is chaotically constructed: sometimes, two adjacent crystals conduct a current between themselves worse than two distant ones, or vice versa.
By touching the crystals in different places, the object takes measurements of electrical conductivity and the resulting data is displayed on screen as graphs that resemble a rugged landscape reminiscent of the magnetite itself. It produces a kind of electrical topography, created by an algorithm, which visually resembles the object being measured. A further algorithm uses these graphs to generate different parameters for sound synthesis.
The installation is an automated entity, as if realizing itself by touching itself. It does not simply feel its shape or measure its properties, but refers to its very nature, the proto-materials from which contemporary digital systems are created.

Can machines sense and perceive human emotions? Could they support us, empathize, or respond to our inner doubts?

Mirror Ritual reads the emotions of the viewer and uses machine learning to interpret and react to them. Every time a person appears in front of the mirror, the machine responds with a unique poetic message, generated by the machine.

By addressing the manifestations of our moods and engaging in a poetic dialog, Mirror Ritual gives us an impetus to reflect freely on how we feel right now.

What if AI was not based on human perceptions, but on those of an octopus?

The artists sought ways to counter AI models designed for surveillance or prediction, and drew inspiration from the experiences of cephalopods, with their distributed nervous systems and flexible adaptation to their surroundings. They strive to accept the plastic and fluid ‘otherness’ embodied by the octopus. With deliberate ambiguity between figures and background, the relationship of frames and images gives the viewer a fluid, multi-layered and non-fixed sensory experience that evokes the perception of non-human beings: ocean dwellers and artificial intelligence.

Could a machine imagine the Earth’s magnetic field? This robotic neuroinstallation reads data about our magnetic field and then, in its ‘dreams’, depicts its possible landscapes and shows them to the viewer.

Based on the output of a neural network, a 48-string robotic system deforms a flexible mirrored sheet which scatters a red laser beam across itself. As a result, a 3D map of the magnetic field begins to float through the air. This ‘Dreaming Machine’ puts us in contact with the Earth’s magnetic field, something we rarely notice even though it is always around us and determines our lives.